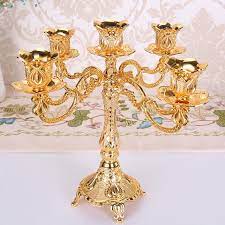 Candlesticks have become popular in our lives. When we decorate our new home, we will choose to buy a candlestick that we like. Then, what styles and types of candlesticks can we choose? Let's take a look.

【1】The definition of candlestick

Candlestick refers to one of the lighting fixtures. It refers to an undecorated or decorated fixture with spikes or holes to hold a candle. It can also refer to the candle on the candlestick. Some containers can also function as a candlestick. For example, glassware for floating wax, a small incense burner for burning essential oils, treated bamboo tubes, etc. There are many styles and materials.

[2] The style of the candlestick

1. European-European-style candlesticks are known for their inlaid craftsmanship. The outline and turning parts are composed of symmetrical and rhythmic curves or curved surfaces. The whole structure is simple and smooth, giving people an overall feeling of luxury and elegance. The solemnity.

2. Chinese-Chinese-style candlesticks pay attention to contrasting decorative materials, and many of them are mainly wooden candlesticks, and the candlesticks designed are elegant, subtle, dignified and rich, giving people a kind of ancient and vicissitudes, and the brows are stained with thick Dust, although compared with the avant-garde and beautiful modern furniture, it is somewhat eclipsed, but with a clever combination, it can still be decorated with a high degree. 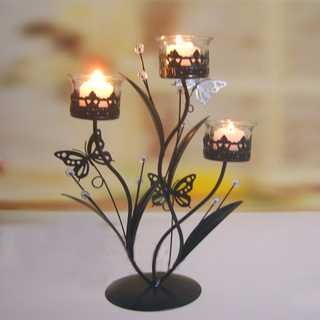 The ancients had candlesticks for burning candles, which were used to cut candles and receive dripping wax oil. The simple one is a holder with sharp needles, and the elegant one will be cast into various craftsmanship shapes. The size is also different. The small ones are placed on the desks of several cases and can be moved and walked in the hand, while the larger ones are placed on the floor, shaped like a floor lamp. There are multiple trays that can burn several candles at the same time. There is also no lack of multi-layer candlesticks. After being filled with candles, it looks like a silver firework tree with brilliant light. The materials are silver, copper, iron, tin, wood, porcelain, tile and so on.

The candle holder is forged, carved, or painted, or cast with various patterns by the inverted mold process. It is a living utensil that integrates practicability, craftsmanship, ornamentation and decoration. Among them are the works of famous craftsmen of the past dynasties, with ingenuity and innovation in the design and production process, which can not only display and admire, but also touch and play. And because it is very common, it has a relatively large amount of existence, and is easy to invest at a relatively low price. It is very suitable for mass players to make collections.

The emblem of Judaism and the central pattern of the national emblem of Israel. It was originally a Jewish ritual product. According to Chapter 37 of the "Bible Exodus", the first candlestick was made of gold by the famous Israeli craftsman and artist Bezalel. The middle one of the seven lamps is slightly higher than the six on both sides. It represents the Sabbath, and the remaining six represent the 6 days of God’s creation. The candlestick became a sacred instrument in the Jerusalem Temple. In 64 BC, the Roman commander-in-chief Tit occupied Jerusalem and looted the sacred objects of the temple. The whereabouts of the golden candlestick is unknown. But on the Triumphal Arch in the Roman Forum, on ancient coins, on Jewish tombstones, and on the mosaic floor of the Jewish synagogue, there are patterns of 7 candlesticks. It actually became the emblem of Judaism.

After the establishment of the State of Israel, it was believed that the temple candlestick brought light and comfort to the homeless and tortured Jews. It also symbolized the hope of reconciliation and recovery. It was the solemn place for the Jews to respect and love God. Therefore, it is determined that the seven candlesticks are used as the central pattern of the national emblem. The national emblem is in the shape of a shield with blue as the background. The 7-branch white candlestick is in the center of the shield, and there is a white olive branch on each side. In the Judaism world, there are still 9 candlesticks used as ritual sacred objects. This is to celebrate Hanukkah Festival. When Hanukkah comes, nine menorahs are lit in Jewish houses and synagogues. The taller branch in the middle is used to light the other 8 branches, one branch is lighted every day during the festival, and all are lighted up for 8 days. Hanukkah, also known as Hanukkah, is a festival to celebrate the victory of the Jews against alien rule under the leadership of Maccabi in 165 BC.

what does a solid green candlestick mean

Candle chart How to read