Advantages of home projectors instead of TVs

In the past, we only came into contact with projectors in teaching and office meetings, but with the gradual improvement of human living standards, the scope of use of projectors has begun to develop for home use and entertainment. Home projector is a very popular living room entertainment home appliance. With it, you can experience the effect of home cinema without leaving home. It can be said to be the benefit of movie enthusiasts! However, there are hundreds of models of home projectors on the market, and the prices are also worlds apart, ranging from hundreds to tens of thousands. How do we choose a projector suitable for our own?

Before talking about how to choose and buy, let's take a look at the imaging principle of the projector. Simply put, the projector will have a very bright light to provide the brightness required for projection, and then the light will be converted into a color pattern after passing through the display chip, and finally the lens will be responsible for magnifying it and projecting it onto the screen. Therefore, the display chip affects the picture quality, the light source affects the brightness of the picture, and the lens affects the size of the projected picture. According to several key points, we need to pay attention to the six aspects of display chip, resolution, contrast, light source brightness, throw ratio and noise when purchasing.

At present, there are five common projection display chips, namely LCD, 3LCD, DLP, 3DLP, and Lcos. In addition to the type, when purchasing, pay attention to the larger the size of the display chip, the better the picture quality and the higher the price.

The light source of the projector affects the brightness of the screen. There are four common light sources: LED, high-pressure mercury bulb, laser, and xenon. 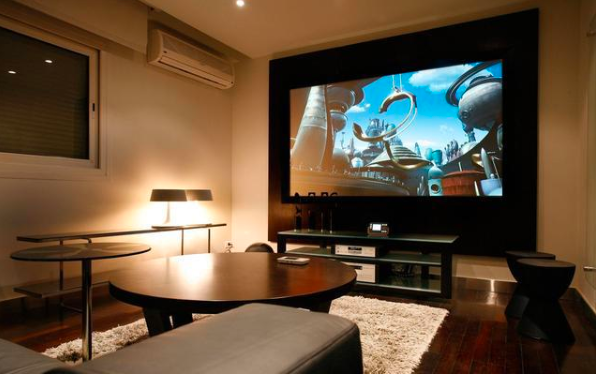 The throw ratio of ordinary projectors is usually between 1.5-1.9. When the throw ratio is less than 1, we usually call it a short throw lens projector. If your living room is wide enough, then using a normal projector is no problem. But if you buy a small apartment, the living room is relatively narrow, and if you consider the heat dissipation distance of the projector, then you should buy a short-throw lens projector, otherwise you will not be able to enjoy the large-size screen brought by the projector. Advantages, this point needs special attention!

We all know that when watching movies, especially in dark scenes, the layering of the picture and the display of details are indispensable, which requires a high-contrast projector to show it. Contrast refers to the ratio between the white and black of the picture. The higher the contrast, the richer the image level and the stronger the color expression. However, if the contrast is insufficient, the black level will not sink enough, so that the picture will be blurred and the details of the original picture will be lost.

Noise is also a point that is very easy to overlook. If the noise is loud, then after taking it home, you will definitely be the one to suffer. When buying a projector for the first time, it is generally ignored that the projector will emit noise, especially in the noisy environment of the shopping mall. Therefore, when buying a projector, try to listen and compare in a relatively quiet environment. , Generally speaking, products with noise below 40dB are acceptable.

Advantages of projectors instead of TVs:

2. It does not hurt the eyes, which is less harmful to the eyes than LCD TVs

3. The screen size can be large or small, making it more convenient to carry

5. Users can adjust the size they want according to their own needs and experience the effect of watching movies on a large screen;

6. The service life of the laser projector is about 20,000 hours. If it is calculated according to the viewing time of 8 hours a day, it can be used for 7 or 8 years, which is comparable to that of a TV;

7. In terms of cost-effectiveness, if the user wants a display screen larger than 80 inches, the projector is more cost-effective.

8. It is convenient to move and break through the traditional film and television space.

9, the screen is larger, to achieve the effect of home theater.

10. The mini projector has no radiation, and it has a full protective effect on pregnant women and people with myopia.

What are the advantages and problems of replacing TVs with home projectors?

Projectors are so fragrant, why can't they still do TV

Should the family choose a projector or a TV?

Can a projector replace a TV?

Compared with LCD TV and home projector, which one has more advantages?