Classification of all Mercedes-Benz models

Friends who don’t know much about Mercedes-Benz cars can easily confuse them when they see the code names of Mercedes-Benz C, GLA, CLS, CLS and so on. In the subconscious mind, Mercedes-Benz must be expensive. In fact, Mercedes-Benz models range from 200,000 to several. It doesn't wait for a million. Although the Mercedes-Benz brand seems to have a large number of models, it is difficult to distinguish, but as long as you master this law, you can see at a glance the class and approximate price of the car. First of all, let's understand the classification of Mercedes-Benz family cars. Knowing this, it is easy to distinguish other models. Mercedes-Benz’s cars are divided into A-class, B-class, C-class, E-class and S-class, with a total of five car series, of which the A-class and B-class are compact cars, the C-class is a mid-class car, and the E-class is a medium-to-large car. The S-class is an administrative-class car, that is, a large car.

For example, SUVs, Mercedes-Benz is also selling five levels of SUVs, a total of GLA, GLB, GLC, GLE, GLS and G-class six car series. GLA and GLB both stand for compact SUVs, GLC stands for mid-range SUVs, GLE stands for medium and large SUVs, and GLS stands for large SUVs. The Mercedes-Benz G-Class is quite special. It is positioned as an all-terrain off-road vehicle and was originally used for the military. Its level is medium and large, the same level as GLE, but the price is much higher.

In addition to traditional models such as cars and SUVs, Mercedes-Benz also has some special models, such as the coupe series, which is the CL series. At present, Mercedes-Benz's coupe series are only sold in CLA and CLS, which are positioned as compact models. And medium to large.

Another example is the convertible sports car series, such as SLC and SL, because sports cars do not have the convention of dividing the level according to the wheelbase, because both are positioned as sports cars. 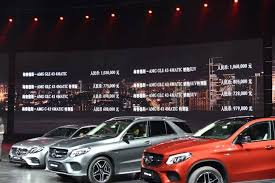